Originally published at bhbanco.org on June 4, 2016
The death of Muhammad Ali has shaken individuals around the world as they remember not just his greatness in the boxing ring, but also his courage of standing up for his convictions of refusal to blindly go to war in Vietnam. Ali wasn’t afraid for his own life; he stood up for the poor, the meek, the people he had no quarrel with and that he knew would suffer in war.

My conscience won’t let me go shoot my brother or some darker people or some poor, hungry people in the mud for big, powerful America. And shoot them for what? They never called me nigger, they never lynched me, they didn’t put no dogs on me, they didn’t rob me of my nationality, rape and kill my mother and father. Shoot them for what? How can I shoot them poor people? Poor little black people and babies and children and women. How can I shoot them poor people? Just take me to jail. –Muhammad Ali

From prison, Michigan political prisoner Reverend Edward Pinkney made this statement in memory and honor of Ali:

The death of Muhammad Ali was shocking to me. And to the world. I am deeply honored to have lived in his time. He was truly a leader who made the supreme sacrifice of himself by refusing to be inducted into the U.S. Army.

America has lost one of its most effective individuals who led by example. Oppressed people, at home and abroad, have lost an articulate voice, a powerful and just voice.

Ali’s words mirror a 20th Century America that had acquired global power, but America also sacrificed some of Ali’s most treasured values on the altar of institutional racism, economic injustice and international influence. He was one of the first Americans, black or white, to offer reform about a promise unfulfilled.

He was both a unique personality and a representative of the people – precisely because he belonged to the people.

Muhammad Ali was my hero. He gave me the initiative to stand tall and make the supreme sacrifice of myself. I will always be in awe of his courage and indebted to the life lessons he has given to the world.

Muhammad Ali was not just a boxing legend; he was an activist, a peacemaker, and an inspiration. Muhammad Ali, the world is going to miss you–my hero.
Reverend Edward Pinkney 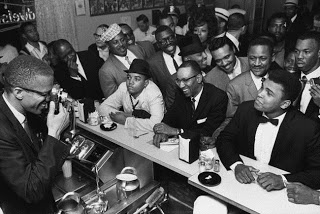