“So many young people are involved now,” says Dorothy Pinkney

BENTON HARBOR, MI — “I was four-years-old when my parents moved to Benton Harbor’s countryside. When we moved to the city, I saw a different side to Benton Harbor. I remember walking around as a teenager. I saw beautiful homes, a beautiful Main Street with many retail stores and restaurants. It was a city booming with factories and jobs. Men came here, got a job, and then sent for their families in Memphis, Arkansas, or Mississippi.” This was the era when mechanization of southern agriculture forced millions in the rural South to migrate north.

“When my parents moved to the city, it was mostly Caucasian. As African Americans moved in, resources like the courthouse and factories were moved to St. Joseph, which became a largely white city. Blacks were no longer welcome.
“Today, there’s nothing left in Benton Harbor. Whirlpool is the dominant corporation that rules the region. As Whirlpool and other factories closed their industrial operations, people became poorer. Now you see abandoned houses, no jobs, and a lot of homelessness.” That poverty has spread into cities with a large Black population, and beyond.

“When my husband got involved as an activist, he told me stories that opened my eyes to injustice. Then an uprising occurred in 2003 when the police murdered Terrence “T-Shirt.” My husband went out to the community to connect with the young people. They were dealing with police harassment and felt they weren’t being heard.

With the merging of government and corporate power, Emergency Financial Managers were brought into Benton Harbor to take more resources away from the community, an attack on our democracy. We got involved with recalling Glen Yarborough, a commissioner-at-large who was selling the residents out to Whirlpool. Whirlpool wanted to buy up city resources. First they wanted the underground cable. Then the lakefront property. My husband and others were opposed to this. This was the beginning of the government’s attack.
“During my husband’s trial [for unproven charges of changing five dates on petitions to recall the mayor], the government brought the community organization he leads, BANCO, into the courtroom. BANCO speaks out against injustice and court watches. It is seen as a threat.

“Whirlpool and the government are trying to destroy the Benton Harbor movement for justice through the attack on my husband. But the ousting of the mayor in the last election shows that people are rising up. The new mayor, Marcus Mohammed, got 90% of the young vote, another indication that the movement hasn’t died. The people are ready for a change.

“I appreciate the hard work and continued support, national and international, to get my husband released from prison. We have to continue the work, even when he comes home. People are poorer than ever. There are no jobs and unemployment is at an all time high. Robots have come in and taken over. The lives of the young generation are at stake. We see so many young people involved now. I don’t think they can be stopped. What they have done is create a generation that is saying, “We’re fighting back at any cost.”

We encourage reproduction of this article so long as you credit the source.Copyright © 2015 People’s Tribune. Visit us athttp://peoplestribune.org

By the People’s Tribune

Fascism, the merger of the corporations and government, is developing further in Michigan, as is the resistance to it.

Once the robots began replacing workers in factories and poverty began to spread, the corporations began to impose fascism to contain the workers and guarantee their profits.
The rulers appointed dictatorial “Emergency Managers” to come in to Michigan cities and slash public services, cut off people’s water, take over school districts, and transfer public assets into corporate hands. Elected officials no longer had authority.

As a result, a movement arose. In Benton Harbor, one of the first cities to get Emergency Managers, the people fought to oust their Emergency Managers. They also utilized the electoral process to oust politicians that represented the big corporations such as Whirlpool. Rev. Pinkney, a leader of this movement and a spokesperson for the most destitute workers, was jailed on phony charges in an attempt to stop the movement. Much to the dismay of corporate power, the movement has not stopped. It is growing.

The same process is unfolding in other Michigan cities. Emergency Managers, who gave the green light for water cutoffs to thousands in Detroit and the poisoning of the water in Flint, now stand exposed as agents of the corporate-state.

The struggle is showing that capitalism, a system based on the private property interests of the few, is a dying system. It can’t and won’t provide for those it no longer can exploit. It offers only fascism. The question is: how are people to survive?

Use the People’s Tribune to educate about fascism, the attack on our leaders, the vision of the new society—and to defend Rev. Pinkney. A movement has to defend its leaders.

We encourage reproduction of this article so long as you credit the source.Copyright © 2015 People’s Tribune. Visit us athttp://peoplestribune.org 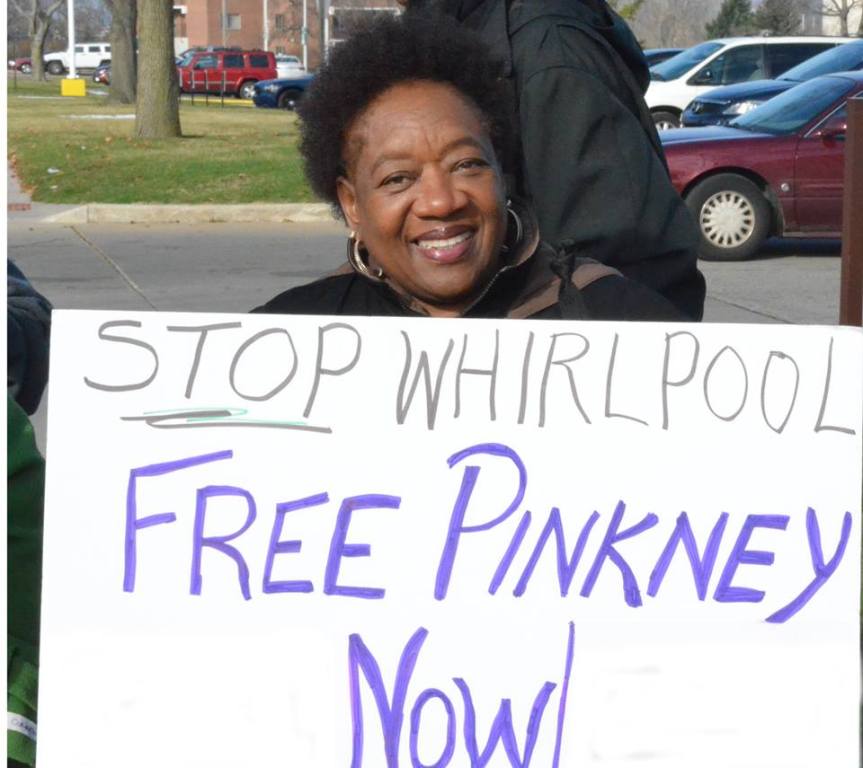