The Framers of the U.S. Constitution said the Government should provide for the “general Welfare,” a mandate to help build a strong and prosperous nation. But the concept has been lost in a wave of anti-government, “neoliberal” propaganda!

The neoliberals are prisoners of the Eighteenth Century. They have not advanced since the neo-feudal teachings of Adam Smith (1723-1790). Smith is the godfather of economics and wrote the “bible” of capitalism, An Inquiry into the Nature and Causes of the Wealth of Nations. Smith was among the first to give much thought about economics.

In Eighteenth Century Great Britain, half the population lived in poverty. They survived, if they did, with disease, famine, illiteracy, lack of sanitation and in slums. It was normal then. Things had always been that way. They thought the poor, starving and ignorant mass of people would always be among them.  They thought their society was according to the law of nature.

Smith was a charitable man. He fretted about poverty, and gave a great deal of thought about wages. With a large pool of the unemployed, the new industrial class only had to pay subsistence wages.

Smith tried to tell the industrialists that people were like cattle. He said if one gave their cows more grass, then they would produce more milk. The industrialists said that if they gave their workers higher wages, then it would come out of profits, and the workers would just produce more children with mouths to feed, leading to greater starvation. The neoliberals still think this way.

The neoliberals see Adolf Hitler or Joseph Stalin behind every government social program. In the 1940s the neoliberal’s idol, Friedrich von Hayek (1899-1992) wrote a thesis called The Road to Serfdom. It is a simple book in its Eighteenth Century theories about government and freedom. There is a comic book version, courtesy of General Motors. Hayek won the Nobel Prize for it.

John Maynard Keynes (1883-1946) and Hayek were colleagues at the London School of Economics. They had a long-running debate for years over the role of government. Keynes realized that government was important, that it has an active role in the economy. He said the government could do “good” and manage the economy well. Hayek said it was the road to serfdom.

Keynes was an economic advisor for the British government during World War I. He also advised the British during the Treaty of Versailles to negotiate Germany’s surrender. Keynes resigned from his position at Versailles in disgust, saying the harsh austerity the Allies were demanding of Germany and Austria would cause massive poverty and starvation. He said it was inhumane and would result in the rise of fascism and war. He proved to be right. He was not awarded the Nobel Prize. 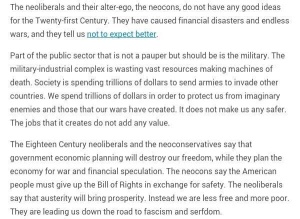 During the Great Depression (1929-1939), President Franklin Delano Roosevelt turned to Keynes for advice about the Great Depression. Keynes wrote a letterto Roosevelt advising him on the need for government social programs to stimulate the economy. Keynes further warned FDR that lowering interest rates and increasing the money supply alone would only bailout speculators, but would not sustain economic recovery.

By contrast, President Barack Obama took the neoliberal advice in the Great Recession and bailed out the speculators. Keynes would have predicted that the result would be anemic economic recovery. He would have been right.

Keynes gave worthy advice that would do the American people well in the Twenty-first Century. The neoliberals keep sabotaging good advice from past sages. Their sabotage is well-funded by corporations, foundations, foreign governments and the wealthy.

John Kenneth Galbraith (1908-2006) was a genius with Twenty-first Century ideas. Galbraith served as an economic advisor to both FDR and John F. Kennedy.  His most famous book is The Affluent Society (1958), a popular book during the 1960s.

During the Stagflation of the 1970s, the neoliberals allied with the religious-right and racists to purge Keynes’s and Galbraith’s teachings. In the 1980s, the Reagan-Thatcher revolution established neoliberals, corporate hegemony and right-wing extremists in the halls of power.