Kickbacks, Conflicts and Darkness: Welcome to Your “Modern” Stock Market 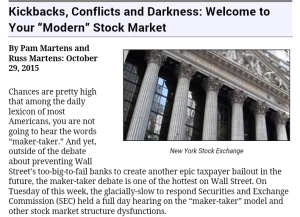 Finance Professor Larry Harris, of the USC Marshall School of Business, told the SEC panel on Tuesday that “fees charged to access standing limit orders are essentially kickbacks that exchanges charge people who want to trade with their clients who offer limit orders. In any other context, collecting such fees would constitute a felony. Although legal in the security markets, they are impediments to fair and orderly markets. They need to go away.”

Despite multiple Congressional hearings since author Michael Lewis published his 2014 book Flash Boys, and went on 60 Minutes to state that the U.S. stock market is rigged, the SEC has done essentially nothing to correct these and many other abuses in today’s stock market structure. Traditional stock exchanges, that are supposed to be self-regulatory bodies, are still charging enormous fees to allow high-frequency trading firms to co-locate their computers next to the stock exchange computers to gain a speed advantage. The stock exchanges are still selling a faster direct feed of trade data to those who can afford the steep price.  Discount brokers are still selling their own customers’ stock orders to dark pools run by some of the biggest Wall Street banks in an unseemly system known as “payment for order flow,” a practice used by Bernie Madoff and which raises serious questions as to whether the broker is routing orders for best execution for the customer or greatest profit advantage to itself.

On June 17 of last year, prior to his retirement, Senator Carl Levin convened a hearing on the stock market’s structure. The title of the hearing was “Conflicts of Interest, Investor Loss of Confidence, and High Speed Trading in U.S. Markets.” Since that hearing, the market suffered another wipe-out of stock limit orders on August 24 when the Dow Jones Industrial Average plunged 1089 points in the first few minutes of trading, taking out limit orders at the lows on the day in many cases. The market then recovered much of those losses to close the day with a loss of 588 points on the Dow.

A similar wealth destruction occurred to the little guy on May 6, 2010, the date of the infamous “Flash Crash,” when the Dow plunged 998 points and then closed the day with a loss of just 348 points. In a speech on September 7, 2010 at the Economic Club of New York, Mary Schapiro, then SEC Chair, told the audience the following:

“A staggering total of more than $2 billion in individual investor stop loss orders is estimated to have been triggered during the half hour between 2:30 and 3 p.m. on May 6. As a hypothetical illustration, if each of those orders were executed at a very conservative estimate of 10 per cent less than the closing price, then those individual investors suffered losses of more than $200 million compared to the closing price on that day.”

What will it take for Congress and regulators to stop this serial fleecing of Americans by Wall Street?