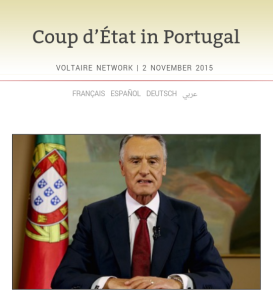 The President of Portugal, Anibal Cavaco Silva, has rejected the coalition government formed with the support of the new parliamentary majority, on the grounds that it includes personalities from the left-wing block and also some Communists.

« In 40 years of democracy, no Portuguese government has ever depended on the support of anti-European forces, in other words, forces which have campaigned to repeal the Treaty of Lisbon, the Budgetary Pact, and the Stability and Growth Pact, as well as calling for the dismantling of the Monetary Union and an exit from the Euro zone – not to mention leaving NATO », the President commented.

« This is the worst possible time for radical change in the foundations of our democracy (…) After having realised a difficult programme costing considerable sacrifice, it is my duty, in my constitutional power, to do everything possible to avoid sending false signals to the financial institutions, the investors and the markets », he continued.

The President pointed out that the majority of the electorate had not voted for an exit from the Euro zone – which is true – but he said nothing about the popular movement of rupture with the Troika’s politics of austerity.

This decision, which constitutes a coup d’État according to the terms of the Portuguese Constitution, is the first institutional affirmation of a ban on opposers of NATO entering into a government of the European Union. It attests to the fact that the Gladio principle did not die with the Soviet Union.